George Tsolis was born on a gloomy December morning in the city of Thessaloniki
where he still lives and works.
From a young age he passed through the looking glass and has not stopped visiting
his personal fantasy world via art, ever since. From 2003 to 2008 he studied visual arts at the Fine Arts
Department of the Aristotle University of Thessaloniki. Earlier he completed studies in graphic design.
George has showcased his work in group and individual exhibitions and is currently involved in applied
arts such as book illustrations and theatrical costume design. 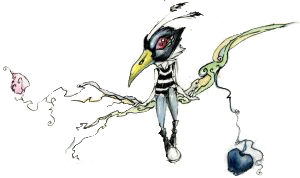 His painting reflects a morphological code influenced by comics, cartoons and random natural spiral
motifs with aesthetically apparent influences of contemporary urban subcultures, characterising adolescence
and post-adolescence and of childhood fairytales and legends.

Every painting constitutes a window allowing glimpses into a scantly lit,
uncanny world, both nightmarish and dreamy…

Through the looking glass & back again, so there!